ALONG THE BANKS OF RICHMOND'S SHOCKOE CREEK


Today Urbanismo walked the area of the First Market on Seventeenth Street and the Richmond Slave Trail, a poignant reminder of the nefarious trade in slaves that was based in Richmond. A heritage tour  is being developed around archeological resources connected with Richmond’s slave markets.


Markets, since the earliest times, have been placed on the edge of built-up parts of towns, where access by wagons and animals is easiest and the noise and refuse associated with them can be segregated. The Richmond market, and, presumably, the semi-annual fair which preceded it, was placed just beyond the plat where the bottomlands prevented easy settlement, beside the bridge which connected the original town with the newer suburbs on the hill to the west. Over time edge markets are surrounded by shops and fully incorporated into the town.

As we have detailed elsewhere, the city government laid out a formal market square in 1793. It ran between the town and the creek and extended 123 feet to the north and south of Main Street. A two-story brick Market Hall was built in the following year on the bank of the creek on the north side of Main Street. While the market hall survived for many years and has been succeeded by three more structures in the same location, the original market square layout was abandoned as the former commons was laid out in irregular lots and streets over the following decades.

Our winter afternoon walk, one of a series of explorations begun last year, started at the north end of Main Street Station, in a parking lot located between the elevated railroad tracks that split apart to pass on each side of the station. In 1879, this was the location of the Chesapeake and Ohio Freight depot that stood between Broad and Grace streets (see Beers Map below). When Main Street Station was built in 1901, the tracks were carried over the streets on cast iron trestles and the tracks fanned out in this area to allow six locomotives to enter the great train shed which fronted on Main Street and ran back almost to Grace. Franklin Street ran below the station, although this was blocked off when the shed was enclosed in the 1980s. The iron trestles taken from the north end of the station were used to create decorative gates at the new side entrances to the train shed.

The area where Main Street Station was built, west of the market, was a natural one for construction of a massive new structure and for the interstate highway which would later overshadow it. The area along the curving route of the creek was subject to regular flooding. Except for a continuous streetfronts added in the early nineteenth century along the valuable lots on Main and Franklin streets, the banks of the creek were nearly empty. Between Franklin and the James River the creek had been confined to a straight channel running perpendicular to Main Street, but once north of Franklin it wandered back and forth under the steep eastern slopes of Shockoe Hill.


A gently rising terrain extended for about two blocks west of Main Street Station. It was once a tightly settled neighborhood of shops, modest houses, and foundries, but is today a parking lot for state employees and the location of the two-story, early twentieth-century Seaboard Freight Depot, fronting on the short stub of Franklin Street that remains intact on that side of the station. A long freight wing extends to the north. The construction of the Richmond Petersburg Turnpike (Interstate 95) in the late 1950s so altered the eastern slope of Shockoe and Council Chamber hills that it is difficult to see their historic form. The elevated highway, wrapping closely around the southwest corner of the station’s ornate tower, also placed much of the area south and west of the station in shadow below the huge concrete highway spans. The earth fill supporting the highway north of Franklin Street creates a steep edge along the valley.

It is in the area of the state-owned parking lots south of Broad Street that archeologists have found foundations of the infamous Lumpkin Slave Jail, one of several dealers that operated on the fringes of the city's commercial center. Much of the slave jail and associated buildings are buried beneath the slopes of fill added as part of Interstate 95. A trail with signage has been developed around the theme of slavery, including the results of the archeological explorations. A larger program of interpretation, including a museum, is planned. Similarly, a large African-American cemetery, abandoned in about 1816, is located below Interstate 95 and to the north of Broad Street. 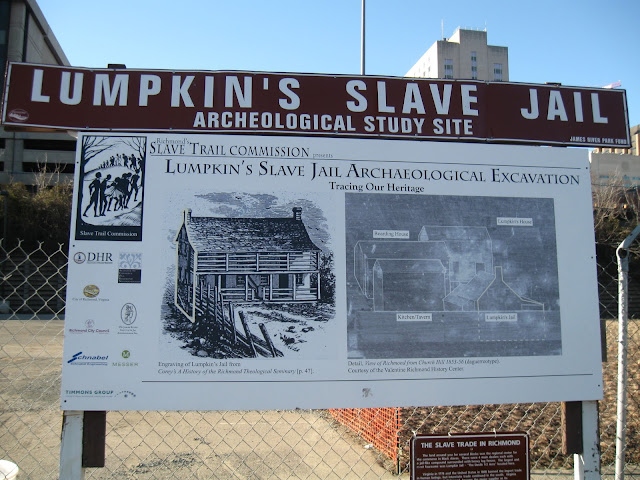 The area along the creek was mostly residential by the late nineteenth century. The descent was steep from the hill, as can be seen in the postcard shown below, so that the Egyptian Building housing the Medical College was on the edge of the hill, as were the Brockenbrough House (Confederate White House) and the First Baptist Church (later the First African Baptist Church). The land at the bottom of the hill on Marshall Street was parceled out by the city to secondary public buildings, principally the Lancastrian School and the City Jail.

The view from the the top of the hill on Broad Street probably looked similarly steep in the early nineteenth century. After Broad Street was extended to the valley in 1845, Shockoe Creek flowed through a narrow bridge under the road. Parts of this still stand, as seen below, although the creek, uncovered throughout the nineteenth century, is now fully underground. The area between the rail tracks was an ideal one for unloading materials. Hungerford Coal and Oil Company is located here. The huge timber bins into which coal was emptied and sorted remain to this day although no coal has been sold since the major flood of 2004.

The area east of the tracks and north of Franklin Street has been used for parking for many years, but in the early twentieth century it was full of tightly spaced shops. Of these only one large building on the northwest corner of Grace and Ambler (formerly Union) streets remain. This housed Loving’s Produce, a wholesale company, until c. 2008. In 1905, it was the warehouse of the Richmond Branch of Armour and Company meat suppliers.

Continuing with the tour, we visited the area between the Market and Main Street Station. The YMCA Hotel, which corresponds to the French Renaissance detailing of the station in style and material, replaced a block of nineteenth-century shops in the early twentieth century. It sits back from the street to match the setback of the station, permitting a corner view of the market shed. Shockoe Creek once ran uncovered in a narrow straight channel just west of the YMCA Hotel. It then curved to the west and ran under the station. It is now entirely underground.

Here we ended our tour of the fragmentary urban tissue along Shockoe Creek with a visit to Havana '59 for some much needed refreshment.
Posted by Gibson Worsham at 1:20 AM 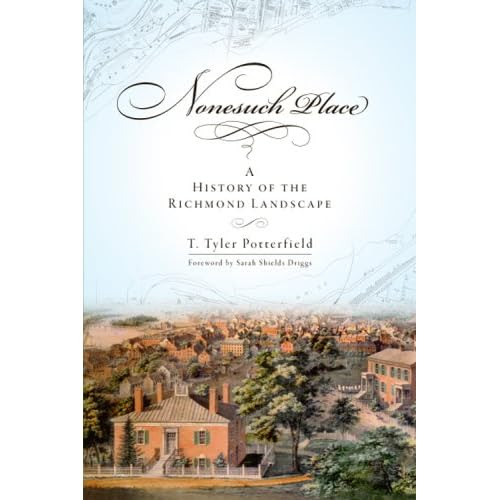