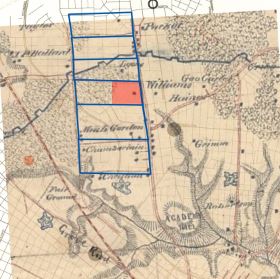 The 34-acre Westwood Tract has been a valuable civic amenity in the Sherwood Park, Laburnum Park, and Ginter Park neighborhoods. The Union Theological Seminary acquired it from 1901 to 1906 for purposes of future expansion. As the character of residential seminary's changed over time, Union Seminary developed the edges of the tract by building several apartment buildings for the use of married local and international students. They also added faculty residences, a group of residences for missionaries on furlough, a maintenance facility, tennis courts, and athletic fields.
A current plan for the development of 301 residential units on 15 acres on the eastern side of the tract has proved to be very controversial. It packs in too many dwelling units and takes too little account of the existing patterns of the surrounding blocks. Instead, the new development employs a conventional program with central parking surrounded by massive blocks of apartments built of wood, clad with both brick veneer and synthetic siding, and featuring awkwardly designed porches, out-of-scale windows, and offset gables. The way that the development is organized purely to maximize numbers and obscures the front of the historic farmhouse at the heart of the Westwood Tract. Part of the remaining areas will be leased to Shalom Farms which will use it as an urban vegetable garden.
Not least among the features of the tract is the old farmhouse at its heart. The historic house known as the McGuire Cottage has a complex and interesting history, which can be better understood by undertaking research in local archives. Important facts that have a bearing on its value to the city and region have to do with its greater age compared with nearby buildings and its excellent state of preservation. Although it has sat empty for many years, the house remains in relatively good condition with no sign of damp or rot. The most interesting take-away from our research is that the house took its current form well before its acquisition by Dr. Hunter Homes McGuire in 1887. Instead, the Italianate section facing east appears to have been added in the 1850s.
The property known as Westwood began as a 539-acre tract of land “in sight of Richmond” on the Brook Road north of the city.[1] It was acquired previous to 1790 by Dr. James Currie (1756-1805), a Scottish-born physician, who began his long career in Richmond in 1769 or 70. Mordecai in Richmond in Bygone Days says that “at the corner of Broad and Tenth streets opposite the First Presbyterian Church, resided Dr. Currie, a strong contrast to the gentle, kind and graceful physician last mentioned, but he had an extensive practice and accumulated a large fortune, which the other did not, because like many other physicians, he was more attentive to his practice than to his fees, and earned many which were not worth attention.”[2]


[1] 1814 Henrico Land Book.
[2] A deed for the Westwood property cannot be found- it may have been recorded in either the District or General Court, neither of which set of records exist today. Land along the stage road or Brook Road about 2 miles north of Richmond show up as early as 1790 [DB 3, 272]. The Henrico land tax records for 1799 show that Currie owned a 511-acre tract.  Land books for 1802 and 1803 show that Currie owned tracts of 571 acres, 181 acres (land on Meriwether’s Branch bought from William Miller in the preceding year), and 28 acres in Henrico County. The 571 acres probably represents the land that would become the Westwood Tract. He added an additional 500-acre tract in 1802-03, purchased from William Randolph.
[3]Henrico Deed Book 10, p 455. A legal case that grew out of the inheritance revolved around a determination whether or not William and Janetta could inherit- and if they actually were naturalized citizens- went all the way to the Supreme Court. Robert and Janetta Gordon won the case, which remains an important part of immigration case law.
[4] 1814 Henrico Land Book.
[5] Henrico Co DB 28, p 408.
[6] Marriages Performed 1815-1828, 1836-1842 at St. John's Church.
[7] Henrico County Land Book 1837.
[8] Gordon vs Gordon in 1844.
[9] Henrico Land Book 1850.
[10] Henrico DB 66, p 185.
[11] Letter at Virginia Historical Society.
Posted by Gibson Worsham at 3:20 PM No comments: