The Biophilic Cities Project and the Urban Imagination 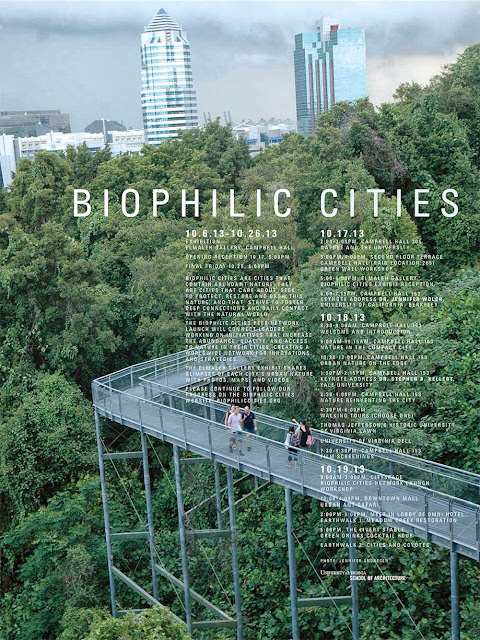 From the point of view of the citizen, wilderness, however beautifully it is ordered in an ecological sense, represents

a chaotic and destructive force. It is the job of the city to organize and channel the forces of nature into patterns that

support the art of living together.


NEWS: The Biophilic Cities Project at the University of Virginia School of Architecture is a multiyear initiative engaging cities across the globe. From Oct. 17 to 20, 2013, it hosted the launch of a “Biophilic Cities Peer Network” to advance the theory and practice of planning for cities that contain abundant nature. Biophilic cities care about, seek to protect, restore and grow nature, and strive to foster deep connections and daily contact with the natural world, said Tim Beatly, Teresa Heinz Professor of Sustainable Communities, chair of the Department of Urban and Environmental Planning and a self-described “biophilic urbanist.”

When asked “What is a biophilic city?” Tim Beatly, Professor of Sustainable Communities at the University of Virginia’s School of Architecture and a founder of the Biophilic Cities Project responds that “perhaps the simplest answer is that it is a city that puts nature first in its design, planning and management: it recognizes the essential need for human contact with nature as well as the many environmental and economic values provided by nature and natural systems."
Urbanismo prides itself on putting the city itself first when it comes to design, planning and management, but we understand about the innate human requirements that are met by parks, gardens, and forests. We have written previously on Richmond’s “great, wet, Central Park.” And we have charted, in Tyler Potterfield’s Nonesuch Place: A History of the Richmond Landscape, the growth of a city-wide park system. Richmond’s “urban forest” sprang directly from municipal determination to make the benefits of public landscapes and street foliage available to the citizens from the earliest days.
Residents of the town and city of Richmond have enjoyed open access to natural settings for recreation and work since its founding in the 1730s. William Byrd’s original plat provided common land along the river and Shockoe Creek for activities like walking, fishing, and washing laundry. Richmonders later set aside public squares, planted trees, and made both private and public gardens in which they strolled, to played, and found a respite from the heat and summer sun. Mostly, however, they attempted, in an inevitably flawed way, to provide an approximation of “the good life” for themselves. Over time, the settlement at the falls of the James developed markets, court and education systems, extensive parks, and a great tradition of public and private architecture. The perennial city as the site of civil life materialized, in spite of inherent challenges, along the unpredictable, untamable James River.
The hopeful arguments underlying the marketing of Biophilia as a new kind of urbanism are based in a popular idea-- that there is a deep psychological connection between humans and natural processes-- posited by biologist and naturalist E.O. Wilson. The Biophilic Cities Project merges this idea with a utilitarian goal of increasing contentment and productivity and an up-to-date foreboding about the future. According to Tim Beatly, Biophilic cities may be “partly defined by the qualities and biodiversity present and designed into urban life, but also the many activities and lifestyle choices and patterns, the many opportunities residents have to learn about and be engaged directly in nature, and the local institutions and commitments expressed, for instance, in local government budgets and policies.”

The Biophilic Cities vision, as articulated on the official website, consists of a series of concepts grounded in the Green and Sustainability movements. Many of these appear to be self-evident, even banal. Residents of Biophilic cities “feel a deep affinity with the unique flora, fauna and fungi found there.” People “are happier, more relaxed, and more productive, in the presence of nature.” Not only is it true that a “near-constant ability to see and experience nature is an important antidote to the stresses of modern life,” but the experience of nature in the city may “supply the essential background and building blocks for creativity, imagination, and artistic expression.”

Biophilic architects assert with confidence that "the benefits of natural daylight and ventilation have been proven to improve productivity and reduce sick days in office workers."

The project anticipates that things may turn unpleasant in the coming years, perhaps as resources grow scarce. Biophilic gardens and natural features will, however, “help to make cities and urban residents more resilient in the face of a host of likely pressures and shocks” to come in the future.
The project to build a Biophilic City may seem, at first, like an attempt to recover some of the architectural and social features that have gone missing from urban landscapes over the past fifty years. A loss of intensity in public life can be seen to have a close relationship with ongoing developments in technology. These included mass transit systems, which, by the 1890s, enabled workers to live outside the city center in new streetcar suburbs. The changes were extended by newer transformative technologies like the automobile and air conditioning. Over time, the schools, commercial centers, office buildings, and manufactories that were not relocated to the outskirts of the city were sealed off from direct exposure to natural forces.
The public square, once the focus of political, commercial, and social interaction, has been depopulated. New building materials and technologies have made possible the nearly complete industrialization of the architectural and building professions, even as much of the population has moved into the “leafy” suburbs. In fact, the move to semi-forested suburbs like those around most American cities may represent Wilson’s biophilic urge at its peak.  It is possible that the Biophilic movement will even lead us toward a merging of suburb and city center-- a hybridizing process which we might be tempted to call “surbanism.”
The Biophilic use of the word nature seems to us to suffer from a lack of clarity. There are several definitions of nature that range from “everything there is and how it works” to “everything there is except man and all his works.” The second definition sets the city apart from natural things, giving it a license to control and exploit the world. Bringing nature into the city would then be introducing a kind of anti-matter into the streets and squares of the city, unable to engage with the civilization they channel and support.
On the other hand, if the city is itself natural, the nonhuman elements of nature that are incorporated into the urban fabric would “naturally” participate in the city’s project of perfecting the life of its inhabitants. In other words, trees and water and animals, including wildlife, would take their place in the urban order, along with public art, rotary clubs, civic buildings, squares, and streets.

From the point of view of the citizen, wilderness, however beautifully it is ordered in an ecological sense, represents a chaotic and destructive force. It is the job of the city to organize and channel the forces of nature into patterns that support the art of living together. For instance, we are sure that urban parks, in order to be useful and used, are best planned as responses to essentially urban activities.
Stephanie Pincetl, Director of the California Center for Sustainable Communities, which studies the “urban metabolism” of “human created ecosystem[s]” like Los Angeles, is onto something when she says:

Nature surrounds us everywhere in the city, we live in the midst of it all the time, but are not even aware of it. Buildings are made from concrete, made with aggregate and water. Roads are asphalt, from fossil fuel. The resources that we build with and make all our daily items with are sourced from nature. When we begin to be more aware of that, it helps us understand the fundamental materiality of cities and how much they are made from nature, far flung, perhaps, and remanufactured, but nature nonetheless. That kind of awareness can better inform our decisions about building materials, their energy intensivity -- or how much energy is embedded in the things we make -- and how the built environment is both the product of transformed nature and then transforms nature where we build.

As we have written elsewhere, “nature includes not only the natural objects around us, such as plants, animals and rocks, but the system of principles by which things can be explained according to reason and which were true prior to their discovery. More importantly, nature provides the mark against which rational judgment is made possible, the moral order which allows us to state confidently that democracy is the best form of government because it has as its goal the good of every citizen, and the goal of all our efforts as human beings.” 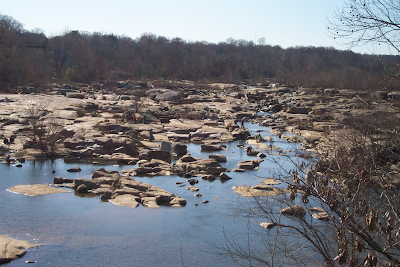 Any failure in our relationship with the natural world is a failure, not of access, but of imagination. City dwellers will recognize that Richmond’s problems do not stem at all from lack of access to the river. We already drink from it, drive over it, and keep its powerful image in our imaginations, where rivers and other similarly potent forces of nature do their most effective work. In fact, the heart of the city is most certainly not the James River: real wilderness has only a small place in the city’s necessary order. Our life as citizens- practicing politics- the great art of living together- is at the heart of the city.

Neglecting our urban life and its finely crafted architectural setting, we have somehow abandoned a shared understanding of what it takes to build and maintain a good city. Our sidewalks have been depopulated, the prosperity that serves the civic good has fled, and our schools seem unable to fully reform themselves. Richmond’s fragile urban connective tissues should be of more immediate interest.

In the end, we devoutly disagree with the goals of the Biophilic Cities Project, simply because the project fails to engage with the most pressing questions posed by our city(s). Its set of proposals, presented as an alternative to traditional urbanism, constitutes an end-run around the existential crisis which afflicts the city.
Posted by Gibson Worsham at 5:51 PM