Reorganizing the Modern City: The Case of Detroit

The following text and accompanying images were composed in Genoa during the summer of 2009 as a submission by Gallarati Architetti to the ResilientCity Competition for the renewal of Detroit, Michigan. Urbanismo had the good fortune to work with Gallarati Architetti on the project in the fascinating Ligurian port city. In the process we were able to learn and apply the teachings of Italian urban morphologist, Saverio Muratori and his concept of urban scale architecture to the continental grid. Special thanks to Mario and Giacomo Gallarati for permission to use these documents. Please click on the images for more detail.

The town in the past was characterized by a high degree of organic unity, deeply rooted in its slow process of formation and transformation, by successive stratifications, strictly connected with the orthographic structure of the place, the network of roads over its territory and the systems of landed property distribution.

To each settlement corresponded a pertinent territory, so structured as to thin away in proceeding from the centre to the periphery where it met the border-line of other settlements. As a consequence, the territorial body consisted of different scale sub-organisms, each having its own centre and its own periphery.

The modern city, the fruit of successive expansions of the original settlements occupying a "nodal" position in the territory, grows at first by saturating its own original territory and then by acquiring areas belonging to other elementary organisms, originally endowed with an autonomous structure, to end by conglobating them totally within its undifferentiated peripheries.

Both in the presence of spontaneous growths and in the case of planned growths, the new urban structure tends to extend itself like a uniform net over a great variety of different local realities, each having its own shape and its own functional balance.  Planning the modern city anew means, first of all, becoming conscious of the growing complexity of the territory that the town embraces in one urban "continuum", through the acknowledgement of the relations and the successive degrees of hierarchy between the elements which form - on different scales - the structure of the city. 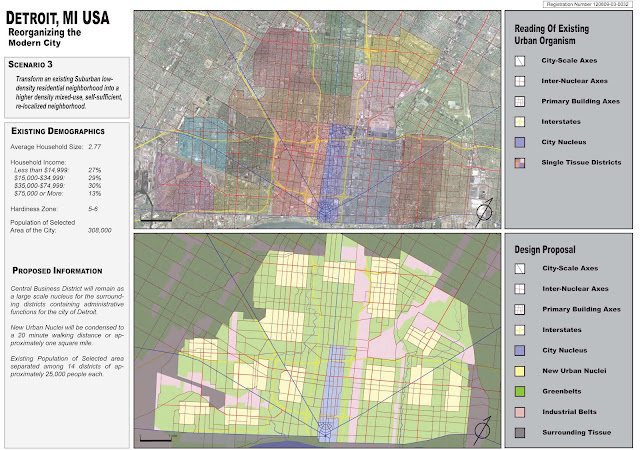 The first level of reading considers the organization of the different sectors of the city with reference to the system of its road-axes and particularly to the different roles they have in the formation and development of its urban fabric. In Detroit we can recognize a double-scale system. One scale is linked to the larger city, and originates from the City’s earliest plan (represented in blue), and another is based on the organization of the land division. This second system is made up of several single districts each characterized by its own structure. We have considered only that part of Detroit which maintains its original orientation towards the river in contrast with the surrounding areas which correspond to the American continental grid. Within this larger city organism we have individuated up to fifteen smaller organisms each with its own center and borders, thus forming its own district. One of these districts maintains the role of city center corresponding to the original planned center of Detroit. The others are located along main axes often at their crossings (represented in red).

Proposal of a Multi-Nucleus City

Our proposal tries to outline a criterion by which to transform the city into several smaller self-sufficient nuclei. Each of these nuclei should be composed of a unified tissue organized by a hierarchy of axes. As a basis for each nucleus we determined which axes served as the primary connection between neighborhoods and the tissues that seem to be organized by the same axes. Between these central nuclei we converted peripheral tissue into green areas for sustainable use. In short, the city will be composed of several smaller autonomous districts, each with a central built tissue (with a concentrated population of approximately 25,000), and surrounded by areas destined for mixed agricultural use and sustainable forestry.

Sheet Two: The District Organism
A Proposal for The Durfee District 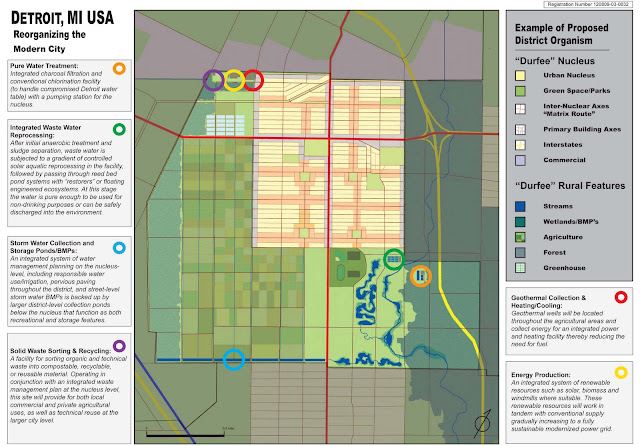 Within the example district of Durfee the urban nucleus will maintain the original order of the axial system that determined the layout of the urban tissue. The surrounding tissue, transformed into green land, will be divided into public parks, agricultural land and facilities for municipal services.

As in other districts, starting from a main road-axis, or matrix route, the setting evolves along planned building routes, orthogonal to the matrix route along which the building fabric evolves.

In our proposal the presence of a second main street parallel to the matrix route suggested the introduction of similar residential tissues as areas of higher density into other sectors. In relating to the existing industrial structures to the north and the sports facility to the south, our proposal accentuates the possible public function of the area along the southern matrix route and destines the remaining western areas to agricultural use, while the eastern areas will be taken up by forest and wetlands. 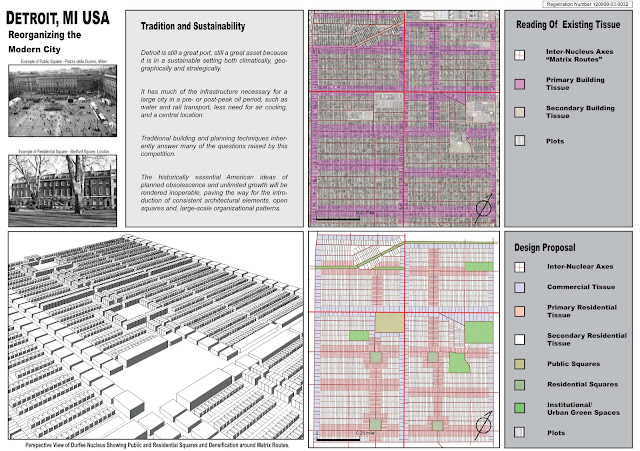 Analogous to the general setting of the network of streets we have already seen, the study of the organization of the building fabric starts from the observation of the preexistent realities, from which we have tried to draw some general rules.

a) Commercial lots are wider than residential lots and form autonomous strips along the main routes.
b) Most of the commercial activities concentrate along the main or peripheral axes.
c) Most residential tissues are organized by planned building routes, between which run alleys. Average lots facing these routes range from 120-130 feet by 30-35 feet.
d) Some of these planned building routes gain importance from their continuation outside the district. e) In some cases there are high-density residential lots which shift their orientation towards significant vertical axes.
f) Within the tissue there are areas of varying degrees of vacancy.

Following the above guidelines we have completed the commercial tissues along main and peripheral axes, and differentiated two types of residential tissue. Along significant planned building routes and some existing or new vertical routes we have organized contiguous, high-density building tissue, while the remaining tissue will maintain its current character. High-density buildings will reach four floors. At the intersection of these main routes new squares will be created, also taking into account some currently vacant areas. Similarly, at a larger scale, a new great public square could be created on the site of present parking lots at the intersection of the matrix routes. Taller buildings could be realized around this main square and destined for administrative or institutional use.

Posted by Richard Worsham at 10:06 PM