Urbanismo visited Paris in early July and was able to concentrate a small fragment of transit time on a pair of remarkable architectural forms- both visits long wished for. First- the École des Beaux-Arts. The second we will save for a later post.

The École nationale superieure des Beaux-Arts serves as a monument to an entire era of international architecture, sadly undone in 1968, although the complex of buildings still serves the fine arts portion of the École. The École was home for two hundred and fifty years to the uniquely French program of academic architectural design. Following the French Revolution, the school was sited in the former convent of the Petits Augustins on the Left Bank, where, in the rooms around the cloister, Alexandre Lenoir (1761-1839)  collected and codified the fragments of royal tombs and other structures that survived after the destruction of churches and palaces. His  Musée des monuments français opened there in 1795 Interestingly, this is said to have been the first time that Medieval art was classed into different periods, according to Lenoir's system, which had a profound effect on the taxonomic system developed by the burgeoning field of art history.

The École emphasized the careful analysis and emulation of great models of ancient and Renaissance classicism, close understanding of the building program, quick sketches, and structural and symbolic logic. Extensive sculptural decoration was closely allied to architectural form and building use.  Those who succeeded in winning the Prix de Rome and years of study at the Villa Medici, were rewarded upon their return with major, long-term government commissions.  Many successful American architects attended lectures there and worked in the associated ateliers and brought back the close attention to planning, the decorative richness, and the ebullience and grand scale of what has since been identified as the Beaux Arts style.

Under the influence of Felix Duban (1798-1870), the architect of much of the École itself, and Charles Garnier, architect of the Paris Opéra, the school was reformed in the mid-nineteenth century. Garnier elaborated an intuitive, empathetic approach to building in which the traditional principles of architectural design were overlaid or superceded by an intensely personal and synthetic style. These included the creation of architectural tableaux, which, in an important institution like the Opéra, provided an expansive stage for the gathering of modern bourgeois society.

Duban began a redesign of the site of the convent in the 1830s and formed a symmetrical courtyard in which he placed many of Lenoir's fragments to create an outdoor architectural encyclopedia, thorough which the history of the arts could be experienced as a procession or as a theatrical storytelling  "mise en scène." Some of these have been returned to their original sites and the whole historical pattern set up by Duban throughout the complex, has been disassembled. The Palais des études, at the back of the courtyard is a remarkable building, built previously to the designs of Francois Debret and on which Duban later expanded and exercised his theories of style. It includes elaborate frescoes, a central courtyard which, after it was roofed over by Duban in 1863, housed a large collection of plaster casts of art and architecture. The exposed cast-iron structure was designed to emulate the fantastic forms found in mural decorations at Pompeii. The slender columns also contained the roof drains. 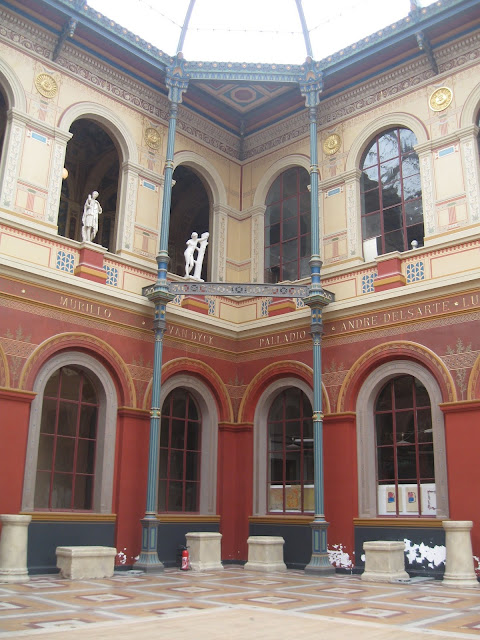 Viewing the Parisian courtyard in person underlines the many connections between the École and Richmond's Jefferson Hotel (1893), designed by École students John Mervin Carrere and Thomas Hastings. Carrere and Hastings were strongly affected by their experience of the work of both Duban and Garnier.  It is not coincidental that the Jefferson Hotel had as its nearest models two buildings by those architects who are most associated with developments in mid-to-late nineteenth-century French academic design, the Casino at Monte Carlo by Garnier and the structures housing the École itself.

The lower court at the Jefferson, destroyed in the fire of 1901, was glazed.  The exposed "Pompeian" columns and riveted girders emulated the great sculpture court at the École, as did the arcade that surrounded it. The hotel was lavishly furnished with art and sculpture by its wealthy patron, Major Lewis Ginter. The selection of an academy of the arts as a model for a hotel lobby may seem promiscuous, unless we infer that Ginter intended the hotel, not only to impress visitors, but to aid in reforming the city's taste in architecture, art, and decoration.

Carrere and Hastings paid direct homage to Duban in the lower glazed court at the Jefferson, but their debt to him is also apparent in more subtle ways- in its compositional and decorative bravado, its scenographic central processional route, and its civic pretensions. Thomas Hastings regarded the orders in a similar light to that of Garnier: they were "elastic and pliable- the willing and ready servants or instruments in composition." [from G. Worsham. Carrere and Hastings' Jefferson Hotel, thesis UVA, 1996].

Meanwhile, our memorable visit to the École drew near its close. At the back of the courtyard of the Palais des  études and at the heart of the building is the Hemicycle d'Honneur, in which the prizes were given out, including the Prix de Rome. Duban's friend, Paul Delaroche, painted an enormous mural in oil - Fame Distributing Crowns - which shows the architect, sculptor, and painter of the Parthenon on thrones in the center, symbolizing the unity of the arts, surrounded the great artists of history gathered in conversation. 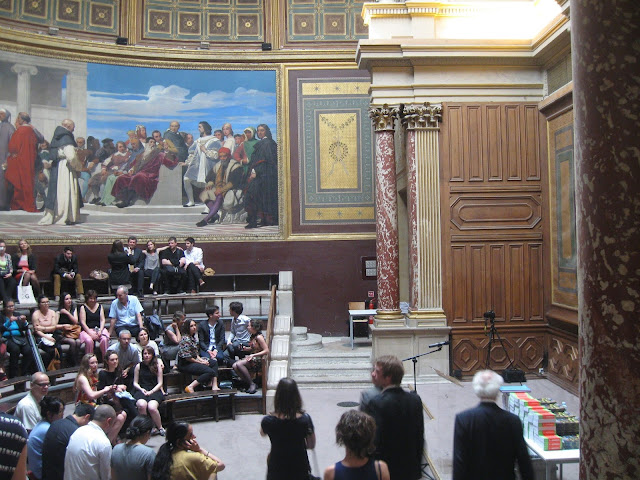 We were lucky that the school was distributing its modern crowns on the day we visited, so we were fortunate to see the room in full, joyous use by students.
Posted by Gibson Worsham at 12:13 AM