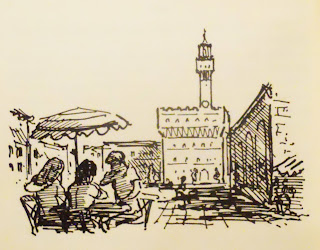 While Mr. Belcher chatted quietly to his fiancée, Friday, February and Gail sat in silence, getting used to it all and just gazing at the Palazzo Vecchio and the copy of Michelangelo’s David and the Neptune fountain and the statues in the Loggia dei Lanzi and everything. Gradually they began to feel that they had always been sitting right there and that Marsh Manor and Boreham and Withering Heights and the journey out really were part of some other life.
“It’s rather marvelous, don’t you think?” said Mr. Belcher quietly, at length.
“Marvelous,” said Miss Pankhurst.
“Marvelous,” they all agreed.
“Not exactly beautiful,” he went on. “Indeed in some ways definitely ugly.” I’ve never cared for any of the statues individually, but taken as a whole it’s . . . marvelous. I suppose there are few places in the world that have seen more violence and sudden death and beastliness of every kind. Savonarola burnt most of the books in Florence just over there—and was soon afterwards burnt there himself. The Pazzi conspirators who tried to murder Lorenzo di Medici, and did murder his brother, were strung up where those hooks are—probably the same hooks. And I dare not imagine the tortured screams that must have sounded inside the palace itself. Yet everything that is finest in the Christian-Humanist tradition for the last six hundred years and more has somehow been linked with this piazza—has, so to speak, grown out of the murder and bloodshed that are associated with all these stones. Skulduggery and idealism have always gone hand in hand—and nowhere more so than in Florence. The horror fades. What is truly worth having endures. As a Latin motto puts it, ‘I arise afresh under a better omen’.”

Posted by Richard Worsham at 10:27 PM